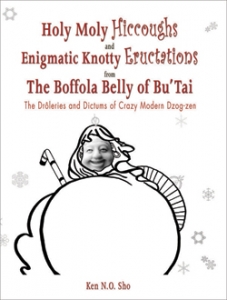 Full of humour and hidden truths about life’s incessant surprises, this book appears to be the first, albeit mayhaps, a yet awkward attempt at the creation of an authentically occidental approach to koan lore. Nevertheless, it does offer a rather non-rational approach to life, and does present a paradoxical perspective to an altogether sometimes, too apparent reality. Intended for a general audience as well as Western Zen students, this book's main aim is the deconstruction of the narrow, thought-impregnated corridors engramatic corrugations of the mind... thereby enabling man to eventually demonstrated with a certain ease, his natural, universal Mind of Being.

A humorous approach to serious Zen.

Koans for the modern consciousness.